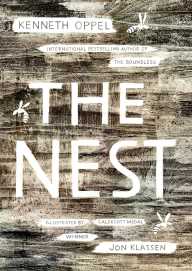 The Nest is showing up on many Best of 2015 booklists.  If you are looking a for an eerie thriller that reads like Neil Gaiman’s Coraline or The Graveyard Book, then you are in for a treat.

Summer is usually a time for fun, but for Steve, it’s the season of worries….Steve worries about his sick newborn baby brother who is fighting to survive, worries about his parents who are struggling to cope, he even worries about the wasp’s nest hanging from the eaves. Then a mysterious wasp queen invades his dreams, offering to “fix” the baby, Steve thinks his prayers have been answered. All he has to do is say “Yes.” But “yes” is a powerful word. It is also a dangerous one. And once it is uttered, can it be taken back? 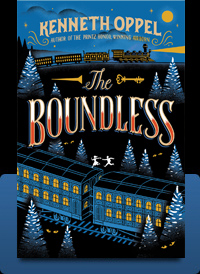 If you’re a fan of fast paced action books with characters like Percy Jackson and Alex Rider, this is a book you should check out today!

The Boundless , like the Titanic is going on its maiden voyage and first-class passenger, Will Everett is about to have the adventure of a lifetime! When Will ends up with the key to a train car containing priceless treasures, he becomes the target of evil figures from his past. In order to survive, Will must join a traveling circus.  Can Will reach his father and save The Boundless before someone winds up dead?

If you like The Warriors series by Erin Hunter you might like Kenneth Oppel’s Silverwing Trilogy.  In this epic adventure full of suspense and plot twists, the main characters are all bats.  In the first book of the series, will the “underdog” prove to be a hero?

Shade is a young Silverwing bat, the runt of his colony. But he’s determined to prove himself on the long, dangerous winter migration to Hibernaculum. During a fierce storm, he loses the others and soon faces an incredible journey. Desperately searching for a way to rejoin his flock, Shade meets a remarkable cast of characters.  But which ones are friends and which ones are enemies?